skip to main | skip to sidebar

What is the state of pro wrestling when The Miz is the voice of reason?
tags: rasslin
0 comments


How the Public Option Got Its Groove Back

Just to be clear, if I were a betting man, I wouldn't be betting the farm on a health care reform bill with a public option. To put it mildly. But just a couple weeks ago, not only did reform seem pretty much dead but any thought that a public option would be included in a deal seemed pretty much crazy. And yet, out of the blue, through a pretty organic and somewhat fortuitous process, it's back.

As if it ever was here in the first place.

And as if a "health care" bill was ever in doubt. One will happen. Who honestly thinks something called "health care reform" won't be signed into law?

In fact I CAN speak in complete sentences, I just often choose not to. So there.
0 comments

The Scottish have UFOS.

There's this writer, this dude, and I read his hilarious shit on the internet and he went by the name Toblerone Triangular. And he was goddamn hilarious.

And this one time I went into this yuppie expensive supermarket at like 2am and was completed drugged out and saw these sitting in a wooden basket next to the cash register: 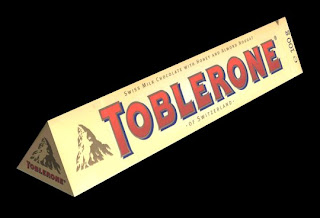 And laughed my fucking asshole off.
I guess you had to be there.
But now those dirty scots are seeing toblerone triangles in their sky. And I know the truth. You might as well submit. Because the men driving the blimps of our future cannot be stopped by conventional means.
Only I will find this post funny. But no one reads this anyhow, so I guess 100% of the readers of this post finds it really funny.
tags: candy bars, internet
0 comments

4 - Locke
8 - Reyes
15 - Ford
16 - Jarrah
23 - Shepard
42 - Kwon
I know I'm just banging my head against the wall trying to analyze Lost which is why I usually don't, but it struck me how the "big reveal" of each of the numbers being attached to a different Oceanic survivor doesn't make any sense. First off, not sure if that was planned as a "big reveal" or not. It is new information that Jacob was behind the numbers being important, but the way they use them doesn't make any sense. The thing (one of the things that continuously gets me about Lost) is that if the creators really knew what they were doing and had this stuff planned out from the beginning it easily COULD have made sense.

The numbers add up to 108, as in "you have to push the button every 108 minutes". Alright. That's cute, but so far doesn't actually mean anything.

However, if they had this stuff worked out, it could have been Oceanic flight 108, which, being the total of all the numbers put together would work on a symbolic level that these people were all important and destiny brought them together to be on the flight.

You could also have switched the "108 minutes" thing in the hatch to every "234 minutes", which would still have meant nothing back in season 2, but now we'd understand it to be Jack and Locke and it would be symbolic of how Locke needed Jack to help him with the button. And that would been awesome. And if 234 minutes was too long, they could just have assigned Jack and Locke different numbers to get whatever length of time they wanted.

Sure, on some level it's still dream logic, but it would have been cool. Instead we have this big reveal in the cave that really means nothing more than seeing the numbers on the hatch door. It's weird and makes you think "wow, what does THAT mean", but then it just sorta fades into the distance as we move on to our next weirdly performance art scene of people not telling each other any relevant piece of information.

I was also struck by the new hot woman who is leaving the beach to go to the temple. It reminded me of that bit from those Star Trek reviews where the ensign brings up a bunch of great questions to Picard. When that woman starts to head off shouldn't someone just stop and go, "Wait, who are you again? Should we be following you? Did you know that plane was going to crash? How do you know about the Temple? Have you been here before? And where did you get Locke's body? How did you even KNOW about his body? Do you work for someone? You know, everyone who we've come in contact with since arriving on this island, whether they were here first or came after us have been highly dangerous and usually tries to kill us. Are you going to kill us? Do you know who Jacob is? Do you know why there are 2 Lockes? Do you know WHAT THE FUCK IS GOING ON? Because you seem to know shit. Do you want to tell us?"

"Thanks for letting me piss on your corpse."

Is it really so shocking that an upper class white woman can get away with murder a few times?


It's starting to seem that Amy Bishop, the biology professor who mowed down three colleagues at the University of Alabama in Huntsville (UAH) last week, had not one but perhaps as many as three outbursts of homicidal violence in her life. She shot her brother to death in an incident that was ruled an accident at the time but looks much more like an argument that escalated to murder. And she was investigated but never charged after a pipe bomb (which did not detonate) was mailed to the guy who ran the lab she was working in at Harvard.

Shit, Laura Bush murdered a guy and that's never even mentioned. Yep, if you're an upper class white woman in the united states you can get away with a lot of exciting stuff.

And if you happen to get kidnapped, well fuck, everyone in the nation will not rest till they find you.
0 comments

A monster is about to eat a cheerleader.


"We think that Survivor Series is obsolete, as far as that title is concerned. It was something that worked many, many years ago, in terms of a creative standpoint, various teams competing. That really is not advantageous as the consumer now looks as what actually they are buying. And it's such a broad ... Survivor Series yes, many years ago, was one of the original four pay-per-views, but it's outlasted its usage and it is one of the things in terms of re-branding, this year and going forward, that will be re-branded. No longer will we have that title, Survivor Series."

What the fuck. This is something ridiculous "Mr. McMahon" would say.

If Survivor Series is obsolete it's because they've mostly abandoned the premise of four on four elimination matches and their storylines and wrestlers are so segregated that it's nearly impossible to find four wrestlers who have any sort of relationship whatsoever with each other.

It's being reported they will abandon this format for another "gimmick" PPV. Yes, lets have another "extreme"/HIAC/Elimination Chamber PPV in an environment where medics rush out and the event stops every time someone has a nosebleed.

But it's true, how can Survivor Series work in a WWE world where the writers can't even develop eight characters at the same time.
tags: wrestling, wwe
0 comments

that whenever the northeast gets a snow storm the rest of the country has to hear about it from virtually every national media outlet in existence. Yes, we know that most of the national media lives in New York, but guess what. The rest of us really don't give a fuck.

It's not like this is Katrina. It's a snow storm. A snow storm that is pretty much nothing more than a local inconvience.